It has been observed that the Real Time Ambient Air Quality data, being shown by DPCC, on its website has some Technical flaws. On the Diwali night, our Team was keeping an eye on the figures of Air Quality Index and the outcome at a specific time was very Shocking and as below: 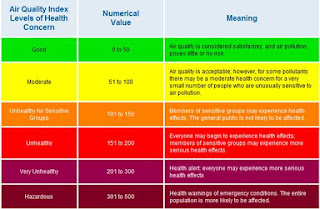 Email ThisBlogThis!Share to TwitterShare to FacebookShare to Pinterest
Labels: Environmental Activist, Is that the Real Time Air Quality Index monitoring at Delhi - Asks B S Vohra

By Pradeep Aggarwal
The moment GST got rolled out in India, the real estate sector was in a state of dilemma regarding how to go about the new taxation system and what will be the new rate. However, ever since the rate of 18 per cent got declared for this sector, where effective rate was 12 per cent (after 33 per cent of abatement), a question playing on everyone’s mind was – why is the same rate applicable to the affordable housing segment as well?

In the last Union Budget, affordable housing got accorded with infrastructure status, thus signalling a strong government support for the same. After GST’s implementation, hopes were high that either this segment would be kept out of its ambit or the lowest bracket of tax would be made applicable to it. The only respite that came for developers was the slashing of GST rates for construction works being handed out to independent contractors, in case the developers are not developing the projects themselves. The rate at which the contractors would now charge GST for their work has been reduced to 6%, which will help in marginally bringing down construction costs.
A lower tax net was needed in order to reduce the burden on developers and thereby assisting the customers with lesser tax liability. Furthermore, with the anti-profiteering clause in GST, developers will have to abide by the rule to pass on the benefit of input tax credit to the respective customers. Thus, it is a win-win situation for both developers and customers, that will gradually help expand the demand for affordable housing.
With a housing shortage of over 2 crore units for the urban poor in India and demand for low-cost housing increasing, a simplified and transparent real estate sector had become the need of the hour where RERA has promised to answer the queries and come out with solutions to the customers. Affordable housing will succeed in following the concepts and rules of RERA which will secure the future interests of every buyer. With affordable housing being a brainchild of the Central Government aimed towards fulfilling the mission of Housing for All by 2022 and RERA striking at the correct time, a different parcel of real estate sector will become prominent in the near future.
with thanks : Financial Express : LINK : for more details.
Posted by B S Vohra at 3:41 AM 2 comments:

Prime Minister Narendra Modi is not called a risk taker for nothing. Apart from the game changing demonetisation and GST, one sector that has undergone a radical transformation is real estate
Prime Minister Narendra Modi is not called a risk taker for nothing. Apart from the game changing demonetisation and a slew of other moves which have unearthed more than Rs 1.25 lakh crore of black money, and still counting, if there is one sector that has undergone a radical transformation, it is real estate.
A recent Confederation of Real Estate Developers’ Associations of India (Credai)-Cbre report highlighted how the Real Estate (Regulation and Development) Act (RERA), the Goods and Services Tax (GST) and theReal Estate Investment Trusts (REITs), will enhance transparency; improve investor sentiment; increase the share of organised sector; regulate unorganised sector; encourage competition and consumer confidence; improve ease of doing business; enhance operating fabric; make affordable housing the growth catalyst in the real estate segment; and last but not the least, give impetus to the Pradhan Mantri Awas Yojana which envisages housing for all by 2022  against the backdrop of a shortage of 20 million affordable homes in urban India alone.
The current BJP-led NDA Government’s commitment is reflected in the smart cities mission which is worth one lakh crore rupees; the Rs 77,000-crore Atal Mission for Rejuvenation; and the urban transformation scheme that provides basic ammenities like water supply, sewerage, transport to households and various other measures like the creation of the Rs 4,000 crore National Investment and Infrastructure Fund.
The real estate market, hitherto marked by opacity and unscrupulous players, is set for transformation for the better, given the regulatory overhaul by the Modi Government. It is estimated that seven billion dollar, or maybe more, from offshore equity investors, large corporates and High Net Worth Individuals, are slated to enter the real estate space this year  after $5.7 billion by way of Foreign Direct Investment and $32 billion via private equity funding in 2016.
Speaking of affordable housing, enabling policy initiatives like 100 per cent service tax exemption to affordable housing and according it ‘infrastructure status’, increase in abatement period from three to five years, hiked exemption limit on interest outgo on home loans, Credit Linked Subsidy Scheme under Pradhan Mantri Awaas Yojana, linking home loans to Marginal Cost of Lending Rate to ensure effective monetary transmission of interest rate cuts by banks, Benami Property Act, higher budgetary allocation for rural housing from Rs 15,000 crore to Rs 23,000 crore in 2017-18, allocation of Rs 29,000 crore under the Pradhan Mantri Gramin Awaas Yojna, will go a long way in ensuring the initial target of 10 million homes by 2019.  Such initiatives will ensure a ‘living’ reality for a large swathe of India’s 1.3 billion population.
Coming to GST in the real estate sector, what is commendable is that the GST has brought all indirect taxes (service tax, excise duty and value added tax), which applies to procurement of goods and services during the construction stage, under one unified tax. This has lead to a scenario where what remains is only direct taxes like capital gains tax, wealth tax and, of course, stamp duty.
Considering that almost 70 per cent of the real estate market caters to the middle and high income segments, the GST should help shift focus, particularly for smaller developers, towards the Economically Weaker Sections and Lower Income Groups of the society.
Also, the biggest hurdle for developers has been removed by allowing deduction of land value equal to one-third of the total amount charged by developers, thereby ensuring that the developer passes on the input tax benefit to the buyers.

with thanks : Pioneer : LINK : for more details
Posted by B S Vohra at 3:39 AM No comments:

The real estate sector is slowly catching up after being affected by the goods and services tax (GST) and Real Estate Regulation And Development Act (Rera). It has, however, seen a lot of churning among senior management roles, especially in finance roles.  At least half a dozen senior executives, including chief executive officers (CEOs) and chief finance officers (CFOs), have quit and joined rivals or started as independent professionals in the last couple of weeks. “After the GST and Rera, finance, compliance and legal roles have become very critical and are in ...

with thanks : Business Standard : LINK : for more details
Posted by B S Vohra at 3:38 AM 1 comment: Email ThisBlogThis!Share to TwitterShare to FacebookShare to Pinterest
Labels: Sentiment in real estate is positive for the medium- to long-term period

List of items in 28% slab of Goods and Services Tax (GST):

with thanks : India.com : LINK : for detailed news
Posted by B S Vohra at 8:07 AM No comments:

List of items in the 18% slab
The list of items in the 18% slab will be divided into two sections. The first section is the goods section and will name the various items that will be in this slab. However, the second section shall include the names of the various services that will be affected and has been put in the 18% slab.
Goods
The products under the 18% slab are:
Now coming to the Services part, the top service to be taxed in accordance with the 18 percent slab are:
Notably, Rooms with tariff between Rs 2,500 and Rs 7,500 will attract 18 percent of GST, while restaurants in Five-star hotels will also be charged according to the 18 percent slab.
with thanks : India.com : LINK : for detailed news
Posted by B S Vohra at 8:05 AM No comments: